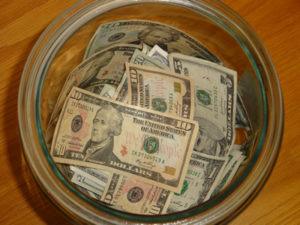 American Medical News
Dieting for dollars: Paying patients to lose weight
One way to get people to live healthier is to reward them for their efforts

THE FIRST CANADIAN HEALTH CARE CONFERENCE
Paying patients to lose weight
Pay for performance, not of physicians but of patients … to prevent and control chronic diseases
The time has come

Creator of the “Dollar for Pound” Weight-loss program and Dollarsfordieting.com

Fat goes for a dollar a pound
A local doctor has taken a new approach to fighting obesity:
Put a price tag on every pound his patients lose or gain… Doctor’s program could be a first.
Daily Press, Newport News, Va., May 7, 2004

Doctor charges $1 for a pound of fat
The Daily Progress, Charlottesville, Virginia, 5.12.04

Weight-loss strategy pays off
Frustrated doctor develops a reward system to help his patients shed pounds
Dr. Joseph Chemplavil launched the weight-loss program one year ago. Eighty percent of the 150 patients who stayed in it lost weight.
Richmond-Times Dispatch, May 24, 2004

Gaining dollars for losing pounds
Doctor pays patients to shed fat
Dr. Joseph Chemplavil of Hampton, Va., last year began offering overweight patients $1 for each pound they shed. He has paid out more than $1,000.
The Washington Times, May 16, 2004

Dieting for dollars: Paying patients to lose weight
One way to get people to live healthier is to reward them for their efforts.
That’s the decidedly pragmatic philosophy behind several initiatives now being sponsored by insurance companies, employers and at least one physician….
“The American way is money,” says Joseph Chemplavil, MD, a cardiac endocrinologist in Hampton, Va. “I have no problem bribing [patients].”
AMNews: June 28, 2004

When all else fails, try hard cash
After years of frustration, Joseph Chemplavil, MD has decided to make losing weight a little more interesting.
In his Hampton, Va. Office, cardiovascular endocrinologist Joseph Chemplavil, MD keeps a jar of cash for patients participating in his $4£ (Dollar for Pound) program. After spending the past 26 years encouraging his overweight and obese patients to lose weight, Chemplavil has finally come up with something that works and he hopes it will catch on: he pays his patients to lose weight.
Endocrine today, August 2004

A A C E M E M B E R S I N T H E
S P O T L I G H T
AACE member Joseph Chemplavil, MD, has been getting a lot of media attention recently for his “Dollar for Pound” program. His program has been cited by multiple publications, including AMNews and Endocrine Today. Dr Chemplavil, an endocrinologist located in Hampton, Virginia, has created a cash incentive program in order to encourage patients to lose weight.
AMERICAN ASSOCIATION OF CLINICAL ENDOCRINOLOGISTS
The First Messenger, Vol. 13, No. 4. Aug/Sept 2004

Doctor Pays Patients per Pound of Weight Loss, Charges for Gains
“The ‘dollar for pound’ program can be used by government agencies, insurance companies and businesses.”
Active Ontario / Ontario Actif, May 11 – June 11, 2004,
Condensed from the Knight-Ridder Tribune

Dollars for pounds
“After 25 years of failing to help his patients lose weight, Virginia physician Joseph
Chemplavil was so frustrated that he was willing to pay them out of his pocket, reports The Richmond (Va.) Times-Dispatch.”
The Globe and Mail, Toronto, Canada, May 21, 2004

livehealthy NEWS
guess who’s helping you get lean?
Besides enlisting support from family and friends for your weight-loss efforts, check out how your doctor or employer might contribute. Here are some proactive (and creative!) programs across the nation:
Joseph Chemplavil, M.D., in Hampton, Va., pays his overweight patients $1 per pound lost after they enroll (for a $10 membership fee) in his “Dollar for Pound” program.
SHAPE January 2005

Get paid to lose Weight
Lose weight, earn cash
How monetary rewards can help you shed pounds….
Doctors are getting in on the act, too. To encourage his patients, Joseph Chemplavil, M.D., of Hampton, Va., pays them a dollar for each pound they take off within one year.
USA WEEKEND MARCH 4-6, 2005


Warning: Use of undefined constant Ives - assumed 'Ives' (this will throw an Error in a future version of PHP) in /home/customer/www/dollarsfordieting.com/public_html/wp-content/themes/twentyseventeen/footer.php on line 44